How about heading south today to make the most of this beautiful day? A visit to the unique archaeological site of Akrotiri can be easily combined with a tour around the impressive Tomato Industrial Museum in Vlychada. Just next door is the amazing Vlychada beach, ideal for relaxation and swimming. Swimming of course whets our appetite, so a good idea would be fresh fish at the fish restaurants overlooking the small harbor. The day ends with the sunset at the imposing lighthouse! 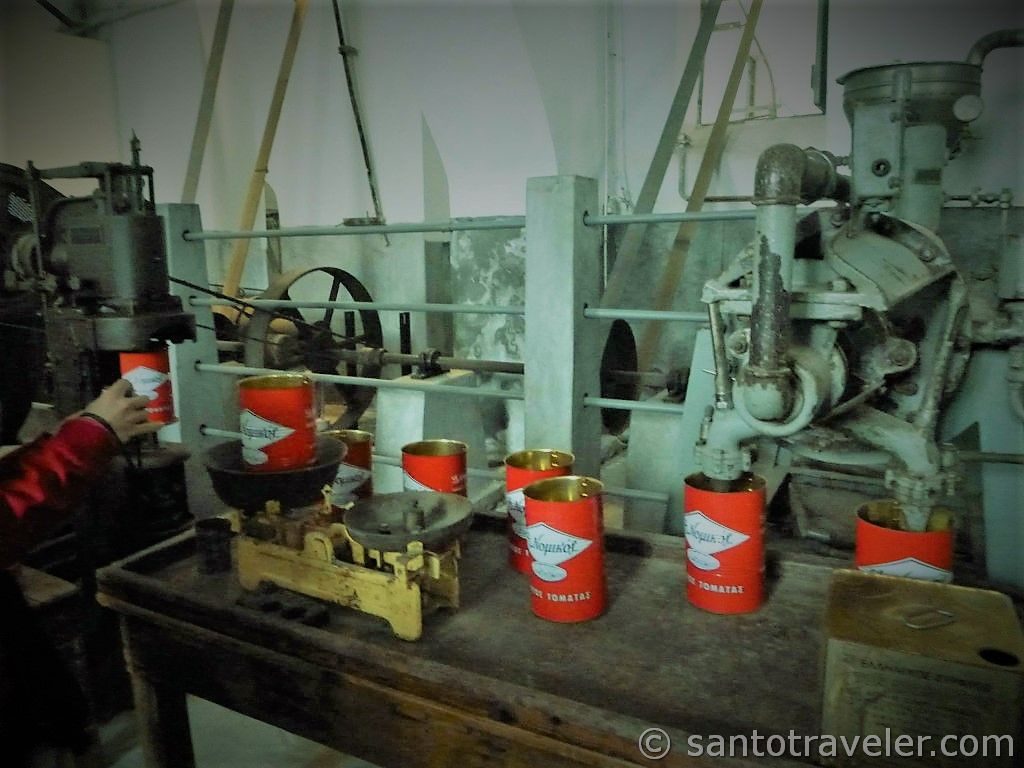 The center of the traditional settlement of Mesaria has all the classic charming village characteristics of the Cycladic islands.

There are little white houses, narrow alleys and the famous blue – domed churches which people often associate with the Cyclades. The village has also imposing mansions which affirm the town’s significant growth in the 19th century but most of them were destroyed in the 1956 earthquake.

During the 19th century, Mesaria was the commercial center of the island hosting industries, mansions and clinics. From the centre of the village, you can notice the large buildings with red roof tiles. These were the Markezini’s textile factories. They were founded in 1889 and had the largest and most advanced looms in Greece, comparable to European factories. They supplied material for the Hellenic military in the early 20th century and, at their peak, had 150 employees and 200 machines. They closed before 1940.

Afterwards, until the end of the 1980’s, the buildings functioned as the winery of Georgios Antonios Markezinis with the brand name Atlantis and Santorino.

Agios Dimitrios, the patron saint of Mesaria village, celebrates today, so you can attend the religious celebration at the church with the coloured flags at the traditional village. After the morning service, the procession of the icon around the village will follow, accompanied by the Philharmonic band of the Municipality.

The internationally acclaimed mezzo soprano Julia Rutigliano visits Greece, and specifically Santorini, for a unique concert. Works by Brahms, Dvorak, Strauss and Bizet will be interpreted and accompanied by the pianist Akemi Murakami at the cozy Bellonio Foundation in Fira at 8pm with free admission.

… How was Akrotiri preserved so well?

The successive waves of ash from the huge volcanic eruption of the 17th century BC carried away the roofs and the upper parts of buildings in Akrotiri. After the volcanic eruption and deposition of volcanic material that led to the burial of the village, torrential rain followed, which eroded pumice and ash. The rain carried mud into the ground floors of the buildings, which led to the preservation of both their contents and the floors above.

The amount of rainfall the day before yesterday, 31 lt/sq.m, equals ¼ of the annual rainfall in Santorini! As the locals say, today finally the weather “has goodness”. The sea is “ladia”, which means without waves, clouds are not spotted on the horizon and summer continues in the Cyclades!
You can explore any beach you spot on the map today. In the most organized ones, like Perivolos, Perissa and Kamari, you will still find a few open beach bars that offer cocktails and coffee. Otherwise, if you want to get a little suntan, simply lay your towel on the black sand and enjoy the October sun!